Poker Stars Hall of Fame and A Look Back (With Results)

I just earned my five millionth VPP and an induction into the Poker Stars Hall of Fame.  I haven't actually submitted my bio yet but I should be up shortly.  According to the site, I'm the first exclusively fixed limit player to make it and the twenty-second player overall to earn at least five million VPPs.  It's one of my biggest accomplishments as a poker player, a reflection of all my hard work and dedication, and something I'm very proud of.

I vividly remember the first night I started the SNE chase about four and a half years ago.  I was sitting on a bed in a Las Vegas hotel room and opened four 10/20 tables.  In fact, I have a picture of it that used to be my profile picture for this blog.  I remember being very excited and possessing an incredible desire and motivation to play.

Although I've been playing on Poker Stars for about eight years now, prior to my decision to go for SNE, the majority of my play was on Ultimate Bet, and prior to that, Party and Paradise Poker.  I remember making the decision to leave the safety of my UB hosting job with 100% rakeback, and feeling very apprehensive about playing on Stars.  Although I played in a lot of tough short-handed games against other hosts on UB, I wasn't really a 6-max player and I felt like I was going to have to practice very strict game selection to succeed.  I think I was very fortunate the first year to run really well at 15/30 which initially was my highest limit.  That allowed me move to 30/60 very quickly where I also ran fairly well.

This is what my lifetime results on Stars have looked like: 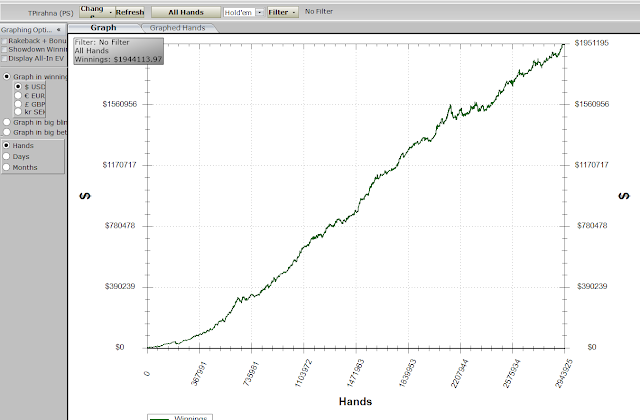 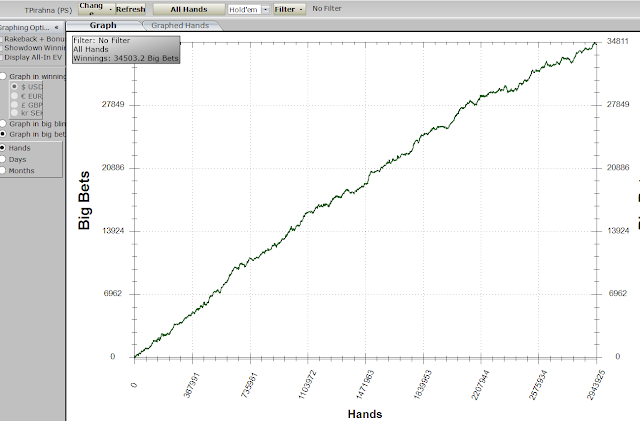 Looking at these results it looks like it's been a walk in the park but the reality is that nothing could be further from the truth.  I've experienced countless 300-900 BB and 50K-100K downswings.  The graphs don't come close to doing justice to just how wild of a roller coaster ride it's been.

These graphs are something I will refer to anytime I'm in the midst of a downswing.  In fact, that's something I've always done over the years.  As miserable as some downswings can be, once they're put in their proper prospective, they don't seem nearly as bad.

The thing I'm most proud of looking at my results is my specifically 6-handed play.  I've averaged nearly 1 BB/100 hands for 1.2 million hands.

I've spent hundreds, if not thousands, of hours over the last five years working on my 6-max game.  I remember towards the end of my hosting job at UB, where I was primarily a heads up and short handed player, looking at specifically 6-handed results and having a negative win rate.  I sent an email to several other hosts asking to check their 6-handed results.  Every one of them responded to say theirs was negative as well.  This really jolted me and brought me to the realization that there was an enormous amount of room for improvement in our games.  This is when I committed a lot of time and effort to studying preflop situations in PT and HEM, analyzing postflop decisions, and discussing hands and strategies with friends.  And these are all things I do to this day and will likely do as long as I"m playing.

Back to the present day, I had a great month last month, in fact I can't remember even having a single losing day.  I ran exceptionally well and played equally as well.  This month it feels like someone flipped a switch and I feel lost at the tables.  I'm around even big bet wise and up a few thousand but I've had incredible difficulty focusing and even keeping track of the action.  I've probably made more mistakes in six days then I did all of last month.  I wish I had an explanation for this but I don't.   This has happened to me a number of times over the last few years and I always seem to snap out of it.  But it's always scary nonetheless.  It's a really uneasy and strange feeling to go from playing my A game for an extended period to immediately playing my C game and not being able to find an easy way to snap out of it.

I think the grind of playing ten hours a day, every single day, may have something to do with my lack of focus.  I'm feeling pretty burnt out right at the moment.  My brother is coming to visit me next week so I'm planning on taking some much needed time off from the tables.  By time off, I mean playing five hours a day instead of ten hours a day.  As ridiculous as that sounds, it will give me time to go to the beach, some restaurants, play tennis, etc.  All things I've done very little of this trip.  I'm up to about 700K VPPs and need to average around 4400 a day to be done by October 15th.  It shouldn't be a problem but I need to find motivation and focus quickly.

Good luck at the tables everyone.
Posted by Tony at 8:56 PM

Your Brain at Work - David Rock

Succeed: How We Can Reach Our Goals - Heidi Halvorson

Links to Poker Sites I Frequent